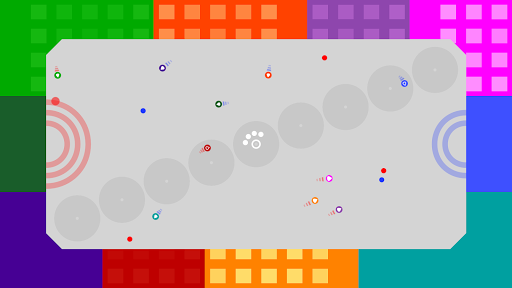 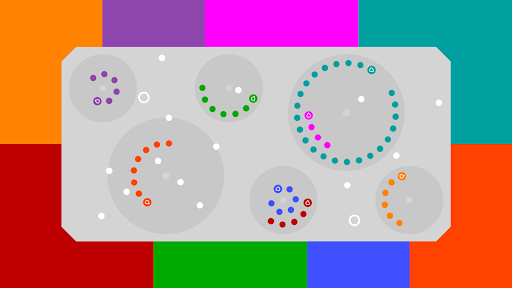 The only local multiplayer game that lets you challenge 2, 3, 4, 5, 6… up to 12 players at once on just one screen. One smartphone or tablet is all you need.

• Competitive local multiplayer for everyone at once. Anywhere. On anything.
• 4 vastly different game modes to choose from
• Setup takes seconds, even for 12 players at once
• The basic mechanics are simple and can be taught to a group quickly
• …yet they provide you with a lot of room for mastery and competition
• Works just as well for 2, 3, 4, 5, 6… players as it does for 12

You can choose from 4 very different game modes:

○ Arena
Fill the arena with spheres of your own color and avoid those of your opponents. A bullet hell game that constantly grows more intense.

○ Multiball (Teams)
Kind of like football, but with exploding goals and multiple balls at once, which change color all the time. Teamplay is more important than mastery.

○ Trails
Collect spheres to grow longer than your opponents. Then block their path and pay attention to your own. And should the other players try to keep their distance, just fling your spheres at them.

○ Blizzard (Teams)
Think tennis. But you have to defend against a whole shower of spheres at once, and send them right back where they came from.

Whether you prefer playing local multiplayer versus or as a team, defensively or offensively, competitively or in utter chaos, anything is possible. Even so, 12 orbits requires only one button per player. This makes it easy to learn and teach others how to play it, yet it still provides a surprising amount of control for perfectionists.

12 orbits is a local multiplayer game for many players at once. But of course, you can also start off with a smaller group. All game modes automatically adjust to 2 players just as well as to any other number: 3 players, 4 players, 5 players, 6 players, 7 players, 8 players, 9 players, 10 players, 11 players, and of course 12 players can all easily compete with each other.

By buying this ad-free version, you support me in the development of 12 orbits and my future projects.
Thank you.
◦ Music playback quality improved
◦ Minor bugfixes for text and animations